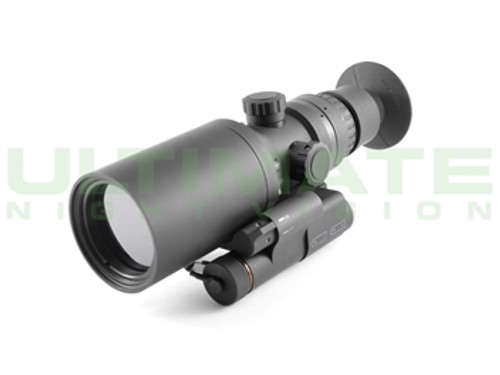 Video Output
The IR Hunter features a high end mil-spec Fischer connector. This connector costs much more than connectors on competing scopes, but IR Defense decided to choose a video connection option that will last under harsh environments and years of abuse. Video cables and connector quality is very important both in tactical and hunting/recreational situation. One flaw in a cable can leave you wishing you had your kill shot on video. We have a high quality custom video cable for the IR Hunter MK II that connects the MK II directly to a mini DVR. These cables are rugged and built to last.


Since the launch of the IR Hunter we here at UNV have seen IR Defense deliver every scope with a high level of quality control and customer service. We not only sell the IR Hunter MK II, we use the IR Hunter MK II on a frequent basis educating customers and night hunting. The IR Hunter line of thermal weapon sights are designed and built by an American company comprised of industry experts, shooting enthusiasts, and technicians obsessed with high quality thermal imagery.

The MK II is the first and only 12 micron, 60hz, day/night thermal weapon sight system on the market. The MK II is available in 640 resolution with 2 lens options. The 12 micron core means existing lenses have a 35% increase in magnification over 17 micron sensors. The 12 micron sensor also allows a lighter weight and lower cost system over the IR Hunter standard. With a 3 turret control system to operate every function, the IR Hunter MK II is an easy system to master for hunters of all skill levels and experience. With a design similar to standard day optics, all the shooter needs to think about is sight alignment, cheek-weld, breath control, trigger squeeze, and not about pressing the wrong button.
The IR Hunter MK II has been designed and built by a team that has been delivering great thermal sights, industry-wide, for 20 years. Not just technicians, the IR Hunter MK II designers are enthusiastic, American Shooters as well. We passionately demand reliability and precision from our optics when putting rounds down range no matter the weather conditions, nor the time of day. This drive and commitment lead us to make the best possible thermal scope,and, we did it! It was achieved,1 00% here in the USA, and without compromising quality or reliability. That would typically be enough; but the team went a step further, introducing the IR Hunter MK II thermal weapon sight to market for a highly competitive price.

IR Hunter MK II contains all the features and ergonomics you have wanted, combined into a sleek system made to securely fit onto your rifle. You should find comfort operating the IR Hunter's Turret Knob controls as they are located where you expect them to be, same as your day optics. The other guys' button controls are nice; but in the dark, downrange, under fire, your natural instincts will appreciate the IR Hunter's similarity to your day sight. We have also incorporated an advanced lens and EZ calibration system to reduce operate error and increase successful shooting. One of the key attributes of the IR HUNTER is processing power which gives you a BIG and CLEAR IMAGE with super sharp detailed symbols and reticles. This combined with our high precision adjusters allows you to simply sight in, and quickly make ballistic corrections the shot demands. More precision, more hits!