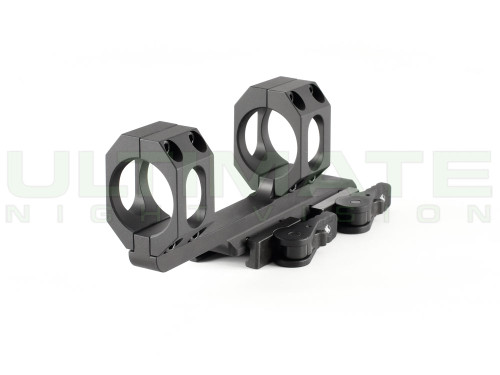 The ADM RECON mount is made for putting high power glass onto a flattop style AR and works well in the same scenario using tubed thermal scopes. Designed to be used in conjunction with a Laser Sighting System to bring the Objective Housing high enough to clear the laser, or for shooters requiring a higher cheek weld for heads up shooting. The centerline height with 30mm rings is 1.63". The cantilever throws the scope out front with 2″ offset, allowing you to get the right eye relief. It is precision machined from 6061 T6 aluminum and finished in hard coat T3 Mil-Spec anodize. It features the Patented QD Auto Lock™ Lever system to accommodate both in spec and out of spec rail systems.

The AD-RECON mount features the Patented QD Auto Lock™ Lever system which has the following advantages:

ADM-RQD mount for the RICO